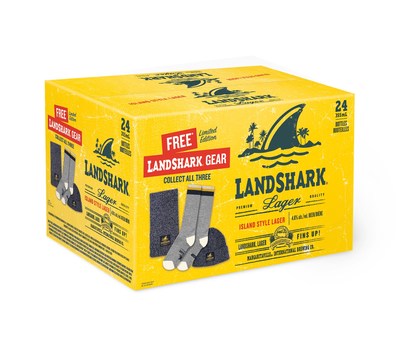 "LandShark is fast becoming a favourite among Ontario beer drinkers," said Jim Manz, Director Commercial, Waterloo Brewing. "LandShark is an extremely refreshing lager, it represents a playful beach party attitude and people are happy to identify themselves with the brand by wearing some of the awesome free gear LandShark gives away in our retail promotions. These specially marked 2-4s of LandShark Lager are now available at The Beer Store… and they sell quickly so don't miss out!"

"We'll also be sending some lucky LandShark Lager fans down to the Margaritaville Resort in Hollywood Beach, Florida to escape the colder weather," added Kim Mannerow, Senior Marketing Manager, Waterloo Brewing. "With our radio partners Dave Rocks in Kitchener-Waterloo and Country 104 in London we'll be giving away twelve trips for two so people can enjoy a little more summer beach fun before winter really starts." More details on the radio contests can be found on the stations' websites.

Waterloo Brewing is Ontario's largest Canadian-owned brewery. The Company is a regional brewer of award-winning premium quality and value beers and is officially certified under the Global Food Safety Standard, one of the highest and most internationally recognized standards for safe food production. Founded in 1984 as Brick Brewing Co., the company was the first craft brewery to start up in Ontario and is credited with pioneering the present-day craft brewing renaissance in Canada. Waterloo Brewing has complemented its Waterloo premium craft beers with the popular Laker brand.  In 2011, Waterloo Brewing purchased the Canadian rights to Seagram Coolers and in 2015, secured the exclusive Canadian rights to both LandShark and Margaritaville. In addition, Waterloo Brewing utilizes its leading-edge brewing, blending and packaging capabilities to provide an extensive array of contract manufacturing services in beer, coolers and ciders. Waterloo Brewing trades on the TSX under the symbol WBR. Visit us at www.waterloobrewing.com