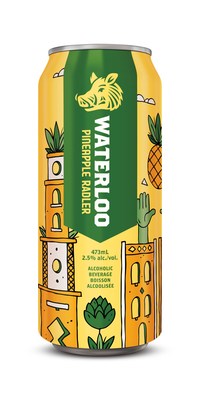 "We've had an amazing response to our growing family of Radlers," said Jim Manz, VP Sales & Key Accounts, Waterloo Brewing. "Unlike other Radlers on the market, ours are made with real fruit juice, which is a point of differentiation that Ontarians are really responding to in a positive way."

"After the success we've had with our now-legendary Waterloo Grapefruit Radler and last year's hit, Raspberry Radler, we immediately started experimenting with new flavours that would blossom in the Radler style, and after doing a small batch brew last summer we knew Pineapple was a sure winner," says Kim Mannerow, Sr. Marketing Manager. "The great thing is, Waterloo Radlers are also just 2.5% alcohol-by-volume, which makes them a lighter, perfectly sessionable refresher for those days when you just want to have fun outside or soak up the sun with family and friends."

Waterloo Pineapple Radler will be available this spring at the LCBO and select grocery stores across Ontario in single-serve 473mL cans for $2.85. In addition Waterloo Brewing will be launching an exclusive secondary new flavour this season, Waterloo Strawberry Rhubarb Radler, only available at the Waterloo Brewing Taphouse and Beer Store.